A Heart of Faith 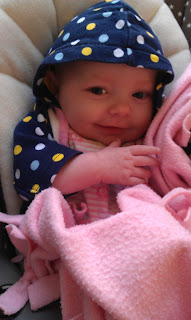 I am on the biggest faith journey of my life in this current season. The stakes are high because I believe that this season is God's merciful way of allowing me to re-take the faith test so that I can succeed. I believe God does this. I believe that when we don't handle situations or seasons, promises or processes very well, God never fails us. He simply recreates a new season to teach us the lesson we haven't yet grasped. I'm in a re-take season involving completely different circumstances than the test I was in before. This season is more in my face daily and I have far less people to depend on. It's between me & the Lord...no one else can strengthen me. No one else can intervene on my behalf. No one else can bring the right words of comfort. The Father alone is my source. So...how am I doing this time around with being a woman of faith???

In the middle of March of this year, I took in a 3 month old baby girl through our local foster care system. This is something I've felt for a while that God wanted me to do. Now, 4 months later, I am head over heels for this kid. She has stolen my heart, my home & my checkbook! :) I started this journey with the desire to adopt a child. As I sit today, I don't know how this process with McKaylee Joy is going to end. It is quite possible that she could still return home to her birth mom, or it is still possible she could be turned over to the state for adoption. I won't know for many more months what will happen. And so...here I sit each day falling more and more in love with this lil' dumpling. Each day fear wants to take over my imagination of what it would feel like to have to return her to a home that knows nothing of the Kingdom & love of God. Each day I have to make a choice of whether I will release myself and McKaylee to the Lord's goodness or whether I will sit in anxiety. As each new circumstance unfolds in this case I'm finding that more often than I care to admit my first response is anxiety rather than trust. However, I'm also finding that I leave that anxiety and come to the place of trust in this re-take season faster than I did before. This is encouraging to me because it's the fruit of God's hand on my heart. He's changing me and teaching me how to be steadfast, unmoved. He's teaching me how to sleep on a pillow in the middle of the greatest storm...just like He did. He's teaching me about His sovereignty and power...because I have none in this case.

I've been praying & asking God to change my heart to respond in trust, rather than anxiety as new things come about. In Psalm 31, David sings, "Blessed be the Lord, for He has wondrously shown His steadfast love to me when I was in a besieged city. I had said in my alarm, 'I am cut off from Your sight.' But You heard the voice of my pleas for mercy when I cried to You for help. The Lord preserves the faithful." David's first response when the enemy approached him was to cry out that God had left him. This is oddly hopeful to me because David is one of my favorite people in Scripture. He had a response system that would jump to fear rather than trust...AND God used him greatly. God's not finished with me yet. It's only His grace & mercy that I get to keep learning how to trust Him. He hasn't given up on me. I'm not a waste of His time. He looks at the faulty ways I've handled faith in past seasons and now sees them as opportunities to give me 100 2nd chances. The Lord preserves the faithful. It isn't about perfection. It's about the willingness to stay with Him even when you have no clue what will happen around the next corner. I love Him so much for this!
Posted by holly benner at 9:51 PM 2 comments: